Hong Kong Pro-Democracy Protests: The Revolution of Our Time

“Fight for freedom! Stand with Hong Kong!” – these words crystallize the powerful and bewildering call, echoed by hundreds of thousands of people, pounding the pavement in Hong Kong defiantly, since the first reading of Hong Kong proposed extradition bill which would allow Hong Kong citizens to be extradited to mainland China. It triggered an unprecedented wave of reaction both domestically and abroad with many fearing the erosion of Hong Kong’s legal system, democratic freedom and built-in safeguards as promised in the Sino-British Joint Declaration.

On June 9th 2019, an estimated one million people marched to the government headquarters to in protest against the proposed bill followed one week later by an even bigger of protest of over 2 million people, nearly a third of the territories population, taking to the streets to protest against the Bill. Since that day, Hong Kong has been plunged into a political crisis, with waves of demonstrations and violent clashes between Police and protestors. What started as a protest against the proposed government extradition, morphed into a wider call for democratic rights and freedom recovery in the semi-autonomous city, transforming everyday Hong Kong life into a cauldron of tear gas as disidentification with “Chineseness” in the city-state continued to grow with young people overwhelmingly regarding themselves as Hong Kongese, not Chinese and continued to search for ways to express how they feel over their vanishing, threatened home.

Protestors’ call for ‘5 Demands’ remained at the heart of the protests: the withdrawal of the bill allowing extradition to China, the release of protesters from prison; repealing the classification of protests as riots; an independent investigation into police violence; and universal suffrage.

My series documents the social movement that swept through Hong Kong, fluctuating between pacifism and frustrated violence, despair and societal pain, the clash between two systems, and their “Fight for Freedom”. 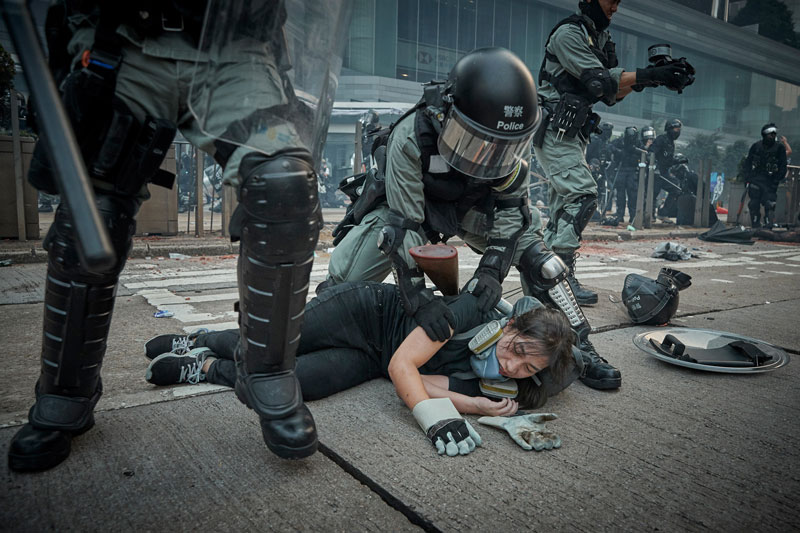 Police arrest pro-democracy protestors during a march amidst rising tensions as Hong Kong braces itself for the 70th anniversary of the founding of the People's Republic of China. Admiralty, Hong Kong Island: September 29, 2019 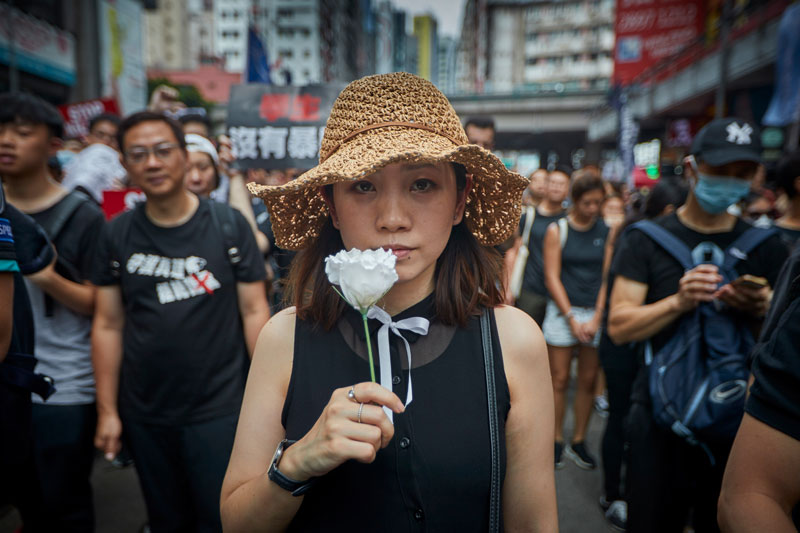 A protestor holding a white flower, the Cantonese symbol of death, walks amongst an estimated two million people. Nearly a third of the territories’ population took to the streets to protest against the government’s proposed extradition bill enabling citizens to be extradited to China.Causeway Bay, Hong Kong Island: June 16, 2019 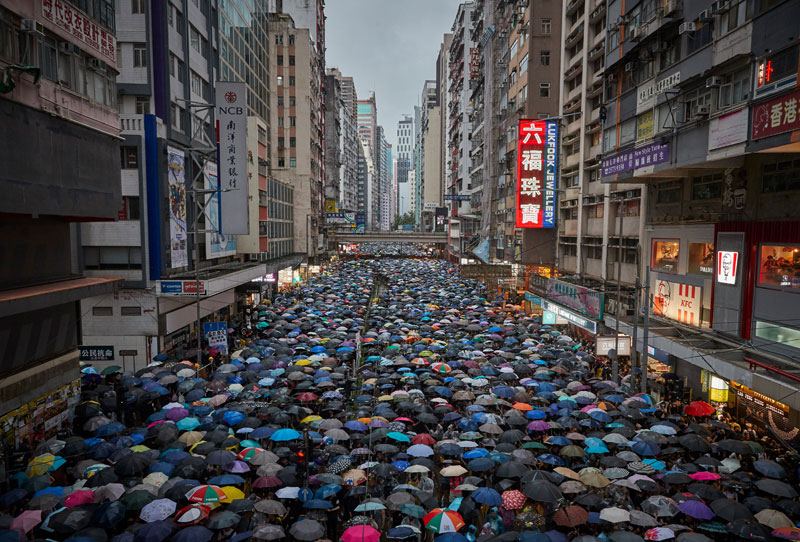 Protestors on Hong Kong Island march in the pouring rain in an anti-government demonstration which saw 1.7 million people march in opposition to a planned extradition law, which has since morphed into a wider call for democratic rights in the semiautonomous city. Since June 9, the city had been plunged into crisis with waves of demonstrations and several violent clashes between police and protestors, with protestors demanding five key concessions from the government, which include the withdrawal of the controversial extradition bill, an independent enquiry into police brutality, the retraction of classification of protestors as ‘rioters', amnesty for arrested protestors and Universal Suffrage. Causeway Bay, Hong Kong Island: August 18, 2019 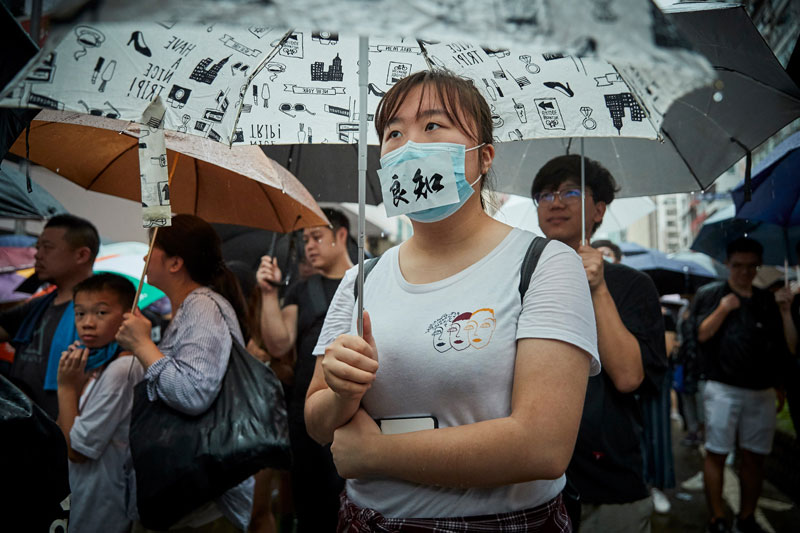 An anti-government protestor marches in the rain with a sticker which reads ‘conscience’, during a demonstration which saw 1.7 million people march in opposition to the Hong Kong government’s planned extradition law. Causeway Bay, Hong Kong Island: August 18, 2019 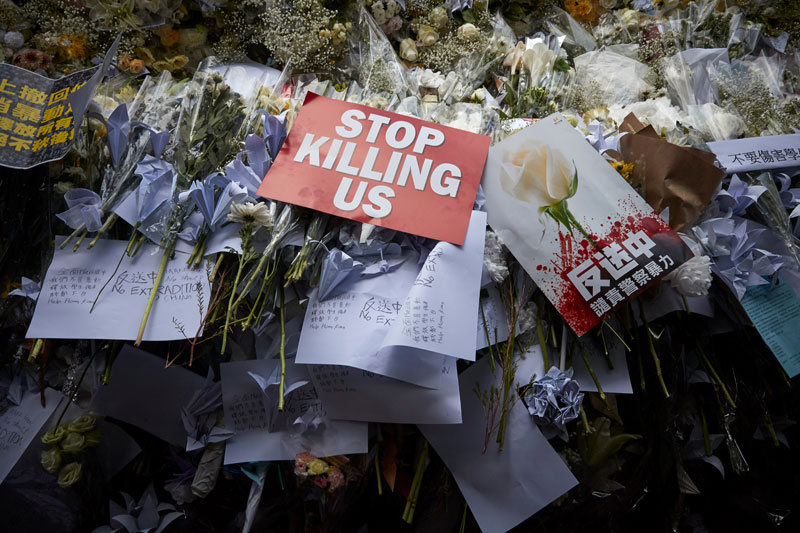 Protestors lay white flowers, the Cantonese symbol of death, as part of a protest against police brutality. Violence between police and protestors had escalated since the start of the protest movement in June, with many accusing the police of abusing their power, resulting in excessive use of force, indiscriminate brutality, and arbitrary arrest. Admiralty, Hong Kong Island: June 16, 2019 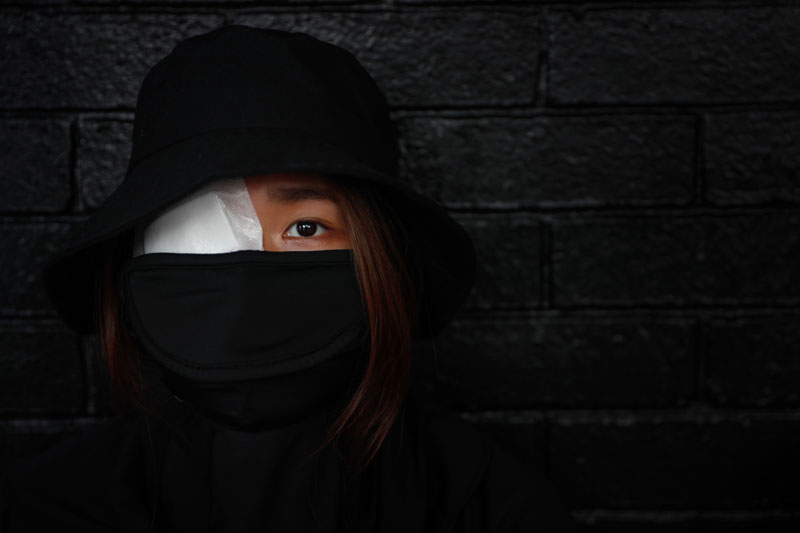 A pro-democracy protestor wearing an eye patch - the symbol of police brutality - takes a break from a demonstration amidst rising tensions in Hong Kong towards the government, the proposed extradition bill, police brutality and the Chief Executive Carrie Lam. Edinburgh Place, Hong Kong Island: August 22, 2019 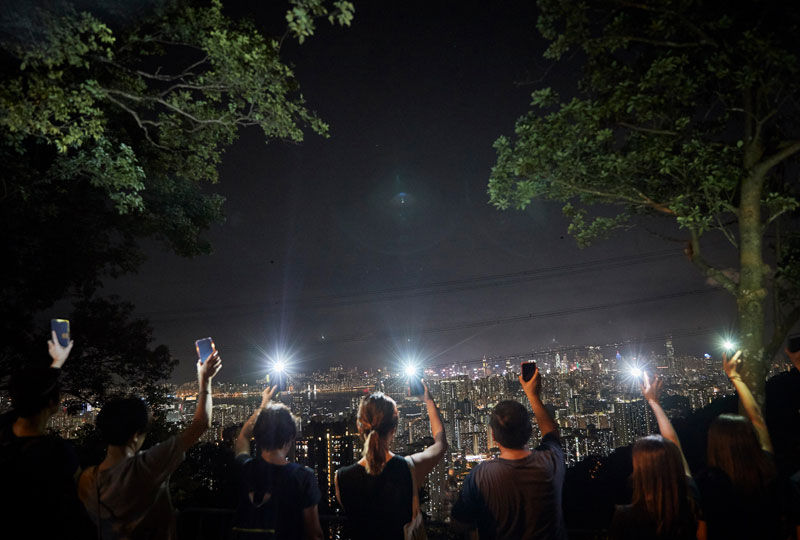 Pro-democracy protestors stand on top of Lion Rock in Kowloon. In a show of unity and protest against the Hong Kong Government, thousands of protestors hold hands and light their phones across Hong Kong, replicating the famous pro-democracy Baltic Way protest across Latvia, Estonia and Lithuania in 1989. Lion Rock, Kowloon: August 23, 2019 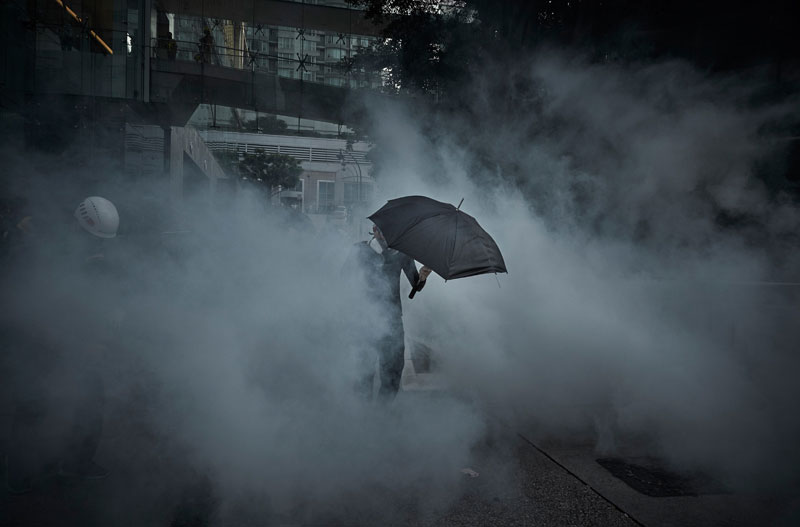 A pro-democracy protestor walks amidst clouds of tear gas during anti-government demonstrations on Hong Kong Island to mark the 70th Anniversary of the founding of the People's Republic of China. Aiming to take the spotlight away from Beijing’s carefully orchestrated celebrations, protests erupted throughout the territory, seeing violent clashes between police and demonstrators. Wan Chai, Hong Kong Island: October 1, 2019 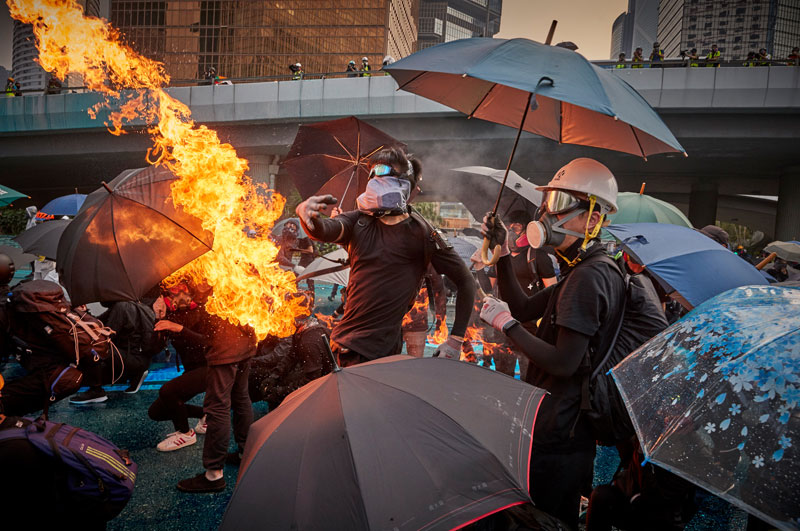 A pro-democracy protestor throws a molotov cocktail towards police, setting fire to other protestors during anti-government demonstrations as Hong Kong braces itself for the 70th anniversary of the founding of the People's Republic of China in two days time. Admiralty, Hong Kong Island: September 29, 2019 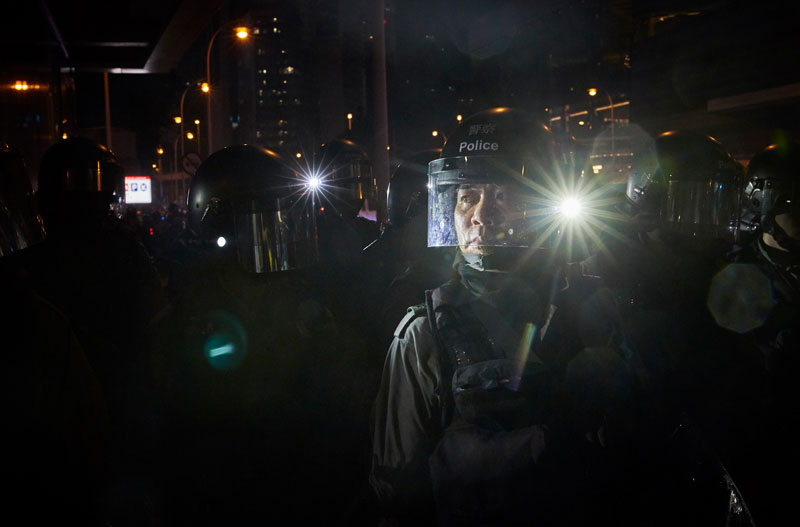 Police push protestors back and shine flashlights in their faces during anti-government demonstrations as Hong Konger’s continue to show their anger towards the government, the proposed extradition bill to mainland China, police brutality and the Chief Executive Carrie Lam. Admiralty, Hong Kong Island: September 29, 2019
SEASON 2020 NOMINEES